On March 27th the CARES Act was signed into law. There were significant changes to retirement accounts included in this bill and we have highlighted a few of the major components below:

• Required Minimum Distributions (RMDs) are waived for 2020
• Withdrawals of up to $100k may be taken from retirement accounts without penalty for those impacted by the coronavirus. The taxes due may be spread over three years.
• Increased loan maximums from retirement accounts of up to $100k, up from$50k previously. There is also no repayment required in the first year.

Unprecedented, unparalleled, unbelievable – all words that describe the COVID-19 pandemic and the associated economic crisis. Governments worldwide have shuttered their economies. These actions have led the world to be in a state similar to a natural disaster with most activity temporarily halted, though the current shelter in place orders do allow for essential services and, for some, working from home. However, unlike a typical natural disaster, no one knows when the economy will return to normal. It seems a “new normal” may eventually become our reality.

From an economic and market standpoint, here are just a few of the quarter’s key developments:

With immediate economic needs affecting virtually everyone, government intervention around the world has been massive in scale and scope. Massive government stimulus programs are attempting to bridge the funding gap from economies being shut down, yet still may not be adequate depending on how long the economic shutdown continues. Many of the initiatives thus far appear to be open-ended in size and scope. In the U.S. alone, federal spending in excess of $2.2 trillion has been approved which amounts to over 10% of GDP (see page one for rule changes in the CARES Act affecting individual investors). Importantly, CBs are also redefining their roles as lenders of last resort and as this is being written regulatory changes are also afoot. These bold actions have helped financial markets recover from the levels that prevailed at quarter-end, but much uncertainty remains. What does seem certain is that the full economic impact will not be known for some time.

In addition, the path of the recovery may prove less predictable given the continued need for social distancing and the almost certain changes in behaviors from consumers, businesses, and governments. This is the quickest and sharpest decline into recession the world has ever seen. We expect sustained levels of high unemployment, more corporate defaults, rising consumer loan delinquencies, ratings downgrades of corporate and municipal borrowers, and perhaps sovereign defaults. Many of the 17+ million now unemployed may return to their jobs quickly, but we expect the crisis will inflict long-lasting demand destruction in the travel, leisure, hospitality, and retail industries, and likely more.

The outlook is grim for economic statistics this year, with most economists forecasting a slight contraction in GDP during the first quarter, a massive one in the second, followed by a modest rebound in the second half of the year. Global GDP is expected to contract by 3% or more for the full year which would be unprecedented since at least 1960. However, since the U.S. entered this crisis in relatively strong shape, it is possible the rebound will surprise to the upside, at least initially. Longer term, the higher debt levels and financial impairment suffered by so many will likely have an impact on potential growth.

Other outcomes we anticipate are an increase in technology use (e-commerce, digital payments, remote work arrangements) and greater acceptance by some politicians who only recently were trying to break up “Big Tech.” What also seems likely is a realignment of global supply chains. Some of Maple Capital’s investment picks should benefit from these trends and we remain alert to other opportunities that may arise from these and other changes in a “post-COVID” world.

Market prices of non-government bonds at quarter-end reflected the weak investor sentiment and poor liquidity conditions at that moment but have generally improved since then due in part to the Fed’s wide-ranging programs designed to improve the flow of credit to all manner of borrowers. Even though Treasury yields are near all-time lows, most yield spreads on corporate and municipal bonds reflect the heightened risks from the economic closures across much of the world. As conditions improve and economic activity resumes, we expect yield spreads to narrow due to ultra-low Treasury yields, although the recovery will likely be uneven. While prices of mortgage securities have already improved with the Fed’s resumption of Quantitative Easing, other areas of the bond market have received ratings downgrades and will likely experience impaired financial performance for an extended time.

Energy markets are perhaps the most dislocated of all due to the breakdown between Russia and Saudi Arabia which resulted in plunging oil prices as demand collapsed and storage became scarce. This market was already suffering from investors’ apprehension over ESG concerns but now faces an almost existential crisis that will likely lead to more bankruptcies soon, mainly of smaller exploration and production companies. Low oil prices are also expected to prove extremely challenging for oil-exporting nations, many of which are classified as emerging markets, which could lead to social instability, default, or both.

Risk assets are more attractive than at the start of the year, but with good reason since the risks are quite real and very complex. The dramatic actions taken to mitigate the spread of the virus could lead some nations to return to normal economic activity soon, but the path forward remains highly uncertain and subject to change. Developed nations are working hard to contain the effects from the crisis and have taken numerous financial measures targeted at the consumer, business, and government sectors in the hopes of limiting the economic impact but it seems certain there will be lasting scars as this crisis becomes the defining event of a lifetime. Developing economies are especially ill-prepared for this crisis and we expect the damage in these markets to be real and potentially long-lasting.

As of this writing, the domestic equity markets have recovered about half of their recent losses and spreads for higher quality bonds have now normalized to close to pre-crisis levels. We expect the recovery to remain uneven and the financial markets to remain volatile as investors digest new economic information as well as the unprecedented government response.

Although much uncertainty remains, it is important to remember the economy is receiving massive and creative support from global fiscal and monetary authorities much more quickly than prior crises. The financial sector is also much better-positioned than at the start of the GFC and appears to be well-supported by the Fed. Many state and local governments are also better-prepared financially, and the American spirit and resolve during a crisis will surely help recovery come faster than many fear at this time. While it is difficult to see a smooth path forward, the world has seen many crises and financial markets eventually recover and resume normal patterns. This crisis too will end, albeit with lingering effects, and we believe the financial markets will reward those who are patient and who can identify value along the way.

We understand this is a difficult time for everyone and we are here should you wish to discuss your portfolio in greater detail. All of us at Maple Capital Management are grateful for your confidence and trust and we hope you and yours remain healthy and safe. 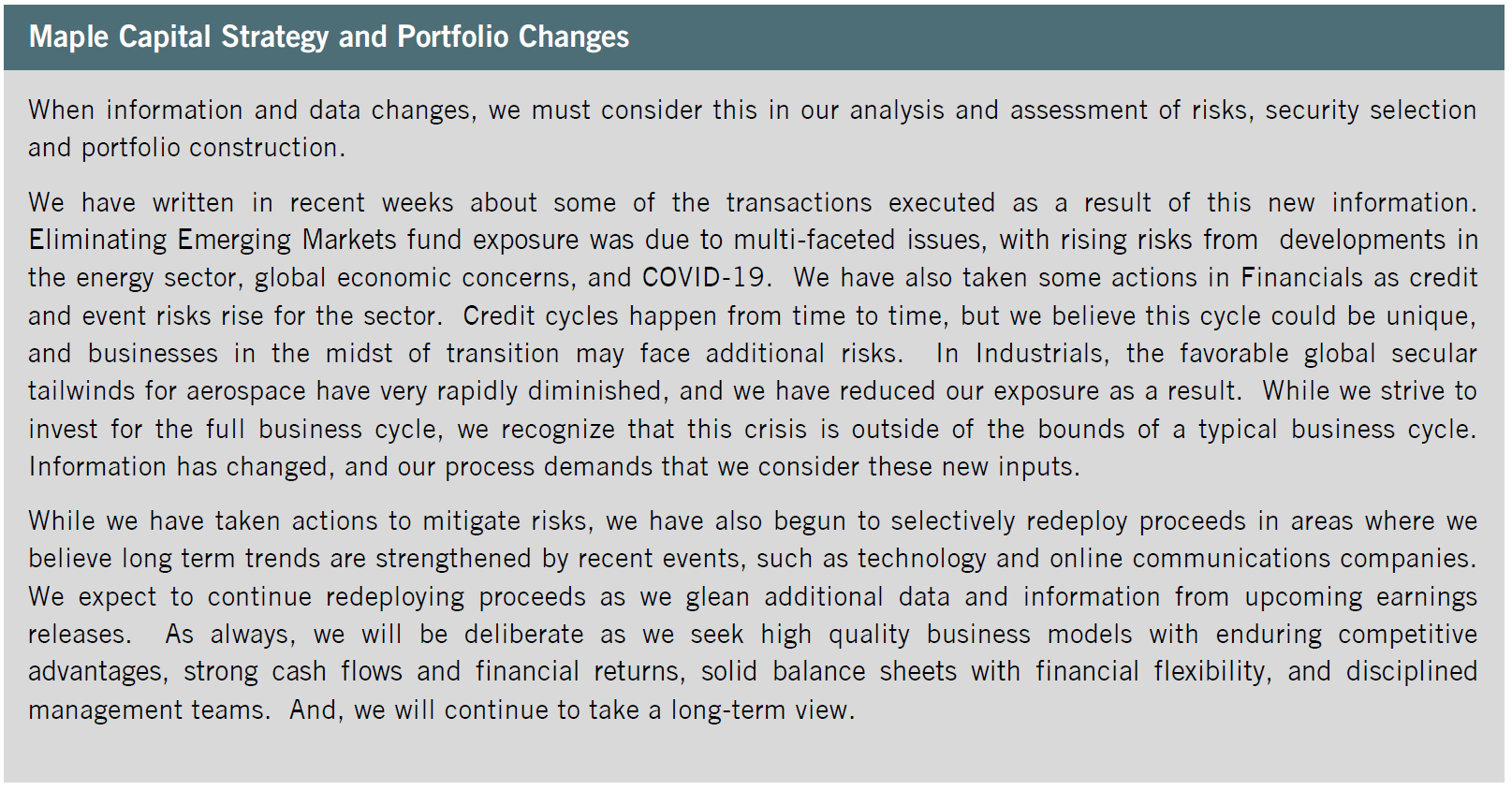