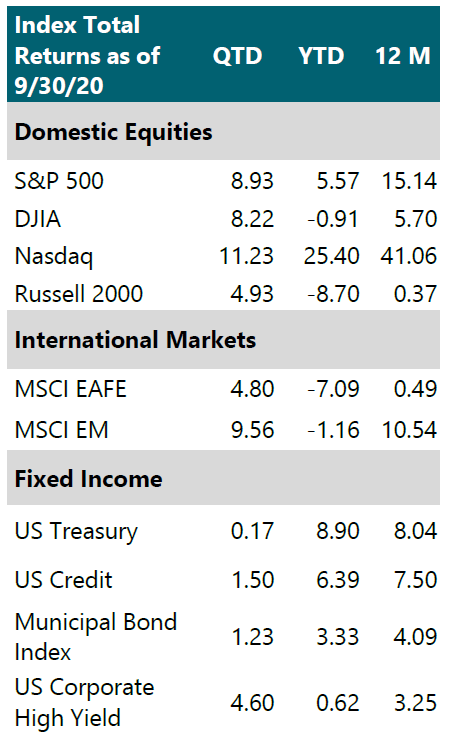 • Equity market performance was solid this quarter.
• The technology sector pulled back after strong YTD outperformance.
• Second quarter GDP was the worst since the Great Depression but there is hope that the third quarter will be quite strong.
• The list of things to worries appears to keep growing as we approach the election.
• Despite the challenges there remain positive catalysts—a second round of stimulus, a potential vaccine, and hope for an infrastructure bill.
• We continue to view quality as imperative given the current social, health, and economic challenges.

Equity market performance was solid this quarter even though the economy is only slowly climbing out of the pandemic-induced recession. About half of those laid off earlier this year have returned to work and many large industries, primarily in the services sector, remain far below pre-pandemic levels of activity. In fact, the list of things to worry about only seems to be growing as the year unfolds with issues such as social unrest, growing inequality, an escalating economic “Cold War” with China, and the lack of additional federal assistance all major concerns. The fourth quarter will also bring the election, of course, but the pandemic continues to be the single dominant factor when gauging the trajectory of the economy.

With so much to be concerned about, it should not be surprising that many of the best-performing stocks for the year, mainly in the technology sector, experienced a pull-back in September, some of which has already been retraced. It was during the early days of the month that equity markets reached new all-time highs, and the looming election may have influenced some to “bank their gains” for the year and take some risk off the table. There are other risks for some of these companies such as the threat of federal regulation or perhaps even anti-trust action that could result in divestitures.

Our view regarding the technology names employed in Maple’s strategy is that long term prospects for earnings gains remain strong. We expect the tech sector to benefit from emerging trends such as 5G, artificial intelligence, and remote work/study arrangements far into the future. Exciting growth opportunities abound for these companies, particularly since they enjoy a global leadership position and are regarded as bellwethers for operational excellence. Lastly, even if divestitures are forced on some, we like the underlying businesses in stand-alone form and valuations could improve as these new spun-off companies develop greater focus.

As for our economic outlook, the second quarter GDP report was the worst since the Great Depression, but third quarter results are expected to be quite strong thanks to the federal assistance programs and the broad reopening of the economy. Going forward, however, we expect the pace of growth to slow, particularly if the next round of fiscal assistance which we have been expecting is delayed into 2021 or scrapped altogether. Many state and local governments would be forced to enact service reductions, job cuts, and perhaps tax increases should this next round not come to fruition. These cuts would only add to the millions now counted as unemployed, many of whom will struggle once the various forbearance programs come to an end.

Beyond the fiscal action, we would point to all the other structural problems that stymie the growth outlook which existed before the pandemic and which are now only exacerbated by the behavioral changes of consumers. Recall that last year, Fed Chair Powell received a great deal of criticism from the President for not lowering interest rates even though the unemployment rate was substantially below 4%. That push for lower rates was partly to level the playing field with other country’s even lower rates and was also tacit recognition that domestic growth was still not adequate. Capital expenditures by the business sector have been meager for some time, and the significant federal debt burden was yet another factor limiting the growth potential of the US according to many economists. If they thought the federal debt burden was high before the pandemic, wait until they opine on our current predicament.

Another growing concern around the halls of Maple Capital is the deglobalization trend that began to take hold last year. Many of us remember the nearly constant skepticism that swirled around China’s economic miracle during the ‘90s. Each time China’s pace of growth showed signs of destabilization, US markets were aflutter since so much of global growth was dependent on China. While the doubts have gone to the wayside and China’s economic miracle proved more durable than most thought, official growth targets have been steadily declining in recent years. So even as China seeks to slow its growth and reduce the imbalances in its economy, now we practically have an all-out shouting match going on and forced sales of Chinese companies by the US. All of this conflict could easily escalate to more serious and lasting damage in the economic relationship and could threaten the fortunes of some of our key companies as well.

We mention these concerns not to scare anyone or sound the alarm but simply to point out the risks that could cause this strong market rally to give back some of the gains as we saw in September. We are optimistic regarding our investment selections but pragmatic and realistic regarding the market. Vast portions of the service economy remain seriously hampered by the social distancing constraints from the pandemic. Absent a cure for the COVID-19 virus, we expect the global economy to limp along for the foreseeable future, particularly if trade is curtailed, and that may exert pressure on corporate earnings as well. Some sectors such as housing and technology will likely grow at an impressive pace, but we doubt they will be strong enough to lift the entire economy.

Even though we are not very confident about a robust growth trend, this year proves that financial markets can perform rather well even if the macroeconomic backdrop is not favorable. A few of the factors we believe to be pivotal today include:

• Optimism around a vaccine since dozens are in development, many in late stage
• Another federal stimulus program with targeted relief for the state and local government sector
• An infrastructure bill that could enable broad job gains

Equity market performance reflects some of this dispersion of fortunes: companies benefiting from the work from home trend have seen their equity prices rally, while a great many are still down from year end. While it may seem tempting to buy equities trading at deep discounts from pre-pandemic levels such as airlines, we believe the earnings power of these businesses is simply too ambiguous and the timeline for an earnings recovery too distant. The risk in these types of companies remains too high in our view and we prefer to invest in companies offering products and services that can thrive no matter the state of the economy. In other words, companies displaying the resilience factor.

We will end this quarter’s Commentary by remembering that a great deal of human suffering has occurred all around us this year along with economic pain and anguish. We at Maple Capital hope you and yours remain safe, remain healthy, and remain hopeful that brighter days lie ahead. Thank you for the trust you place in us by allowing us to manage your financial resources.