COVID-19 had a dramatic impact on markets across the globe in March. Liquidity quickly evaporated as markets assessed the enormity of the revenue, profit, and cash flow implications resulting from the economic shut-downs. Short term policy rates were cut and risk spreads widened to levels last seen during the Great Financial Crisis. 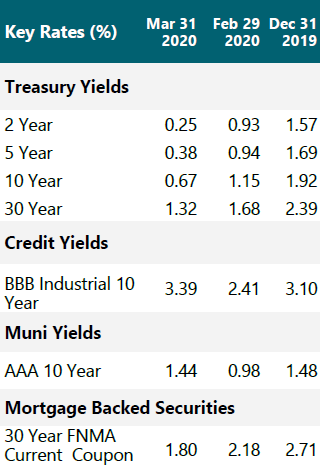 Unprecedented, unparalleled, unbelievable – words that could populate every sentence of this month’s commentary. As the COVID-19 health crisis became a global pandemic the bond market quickly became a focal point with the prescribed medicine, a shut-down of the economy, suddenly exposing the entire country to a credit squeeze. Here are just a few of the key developments during the month:

In observing current market valuations of bond holdings, we want to emphasize the emotional elements that affect risk spreads: investor sentiment, fear, and paranoia seep into the yield spread at which they are willing to part with cash to take on a position. Economic reality may differ markedly from the market valuation during such extraordinary periods of volatility, with conditions quickly evolving amid substantial, coordinated government intervention. Liquidity — the immediate demand for cash from nearly all market participants — also plays a huge part in these spread movements which have been exacerbated by massive outflows from ETFs and mutual funds.

Over the past year, we have written extensively on the low risk premiums in fixed income markets and our desire to avoid taking risk. This stance generally led us to favor bonds with shorter tenors and in sectors with less economic sensitivity. Unfortunately, the scale of this crisis and the economic disruption it has caused have left few safe harbors. Translation: everything except Treasuries has been hurt in this crisis. Still, the recent measures taken by the Fed to improve liquidity should help soon, so we advise patience and we counsel against selling into illiquid markets.

As a result of the sudden shock to the markets, government intervention around the world has been significant and varied. The table in Exhibit 1 below summarizes these measures taken by global authorities thus far to address the crisis since they are simply too numerous and detailed for this commentary. These steps, while enormous, still may not be adequate depending on how long the economic shut-down continues. In addition, the path of the recovery may be less predictable given the intensity and widespread nature of the panic. 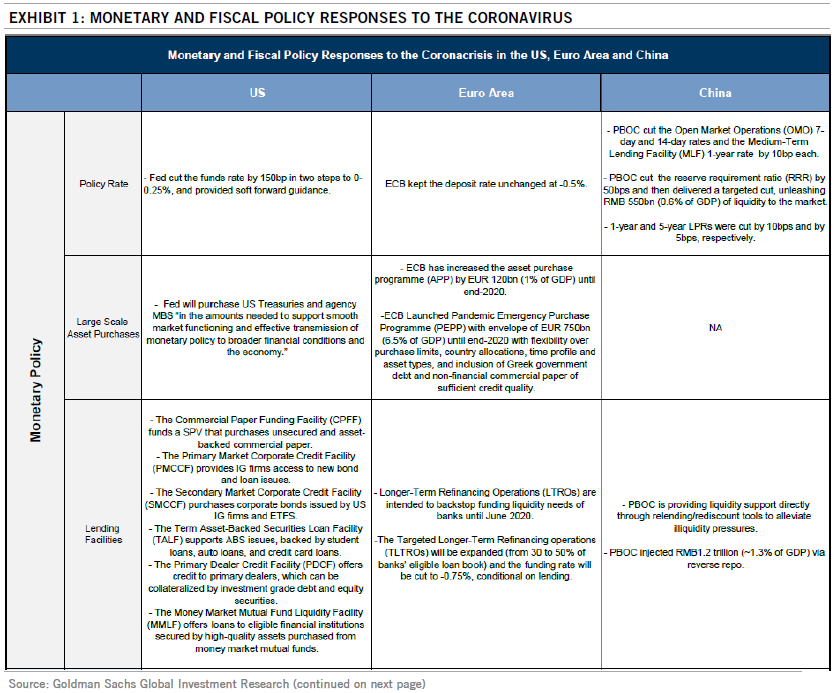 Consumers, businesses, and governments alike will almost certainly change some behaviors as a result of the crisis. This will be the quickest and sharpest decline into recession the world has ever seen, and some of the consequences we expect are higher unemployment, more corporate defaults, rising consumer loan delinquencies, ratings downgrades of corporate and municipal borrowers, and perhaps sovereign defaults.

Energy markets are the most dislocated of all due to the breakdown between Russia and Saudi Arabia which resulted in plunging oil prices even as demand collapsed and storage became scarce. This market was already suffering from investors’ apprehension over ESG concerns but now faces an almost existential crisis that will likely lead to more bankruptcies soon, mainly of smaller exploration and production companies. Low oil prices are also expected to prove extremely challenging for oil-exporting nations, many of which are classified as emerging markets, which could lead to social instability, default, or both.

The dramatic actions and economic shut-downs to try to reduce the spread of the virus and the success of these mitigation actions, along with possible treatments, could lead to a faster return to normal economic activity and recovery. In addition, various financial measures have been targeted at the consumer, business, and government sectors which will hopefully reduce the financial losses for investors. There is a great deal of uncertainty, however, which we believe is likely to persist for a while. Therefore, financial markets are likely to remain volatile as the situation evolves. Higher risk spreads are likely to endure, which is favorable for any new investments being made but negative for existing holdings.

Although much uncertainty exists at this writing, it is important to remember the economy entered this crisis from relative strength. The financial industry stands out as one of those much better positioned than at the start of the GFC. Many state and local governments are also better-prepared financially, and the American spirit and resolve during a crisis will surely help recovery come faster than many fear at this time. When a crisis suddenly appears, it is always difficult to see a path forward, but the world has seen many crises and financial markets eventually recover and resume normal patterns. This crisis will end and we believe the markets will reward those who are patient and who can identify value along the way.

We understand this is a difficult time for everyone and we are here should you wish to discuss your portfolio in greater detail. All of us at Maple Capital Management are grateful for your confidence and trust and we hope you and yours remain healthy and safe. 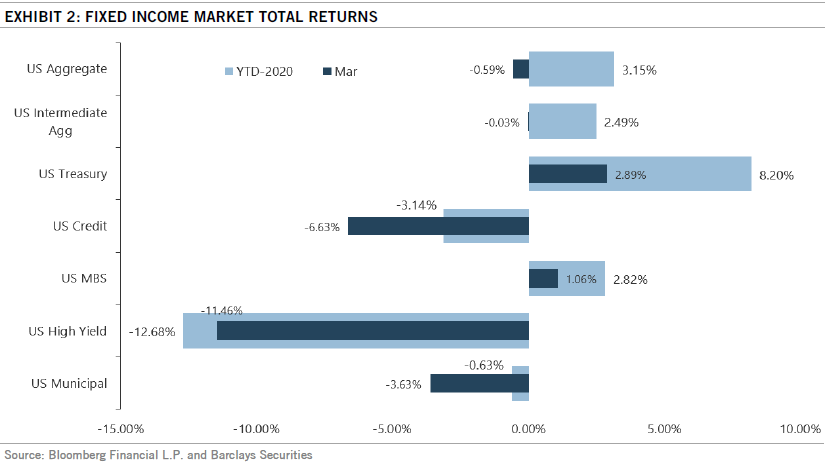