Treasury yields fell and yield spreads narrowed across most sectors in July. While narrowing of spreads is great for existing holdings, it makes the search for new investments more challenging. Looking forward, investors will look towards the pace of rehiring and the willingness of consumers to venture out. Also, details on a new relief package from Congress will be important to prevent jeopardizing the measures that have been taken so far to help reopen the economy.

Bond yields generally declined in July, perhaps in reaction to signs that the re-opening of the economy was faltering. The front end of the curve remains anchored at near zero and the Fed’s post-meeting news conference revealed there is no talk of even thinking about raising rates. With Chairman Powell stating the Committee is “not thinking about thinking about thinking about raising rates” (yes, three times, hence the choice of song title and picture this month!), perhaps the market is not pricing in the zero bound long enough. Other revelations from Powell included the view that the pandemic is a disinflationary shock (which makes the Fed’s goal of 2% inflation even more challenging), the Fed’s review of its “Statement on Longer-Run Goals and Monetary Policy Strategy” remains underway, and the path forward for the economy is extraordinarily uncertain. 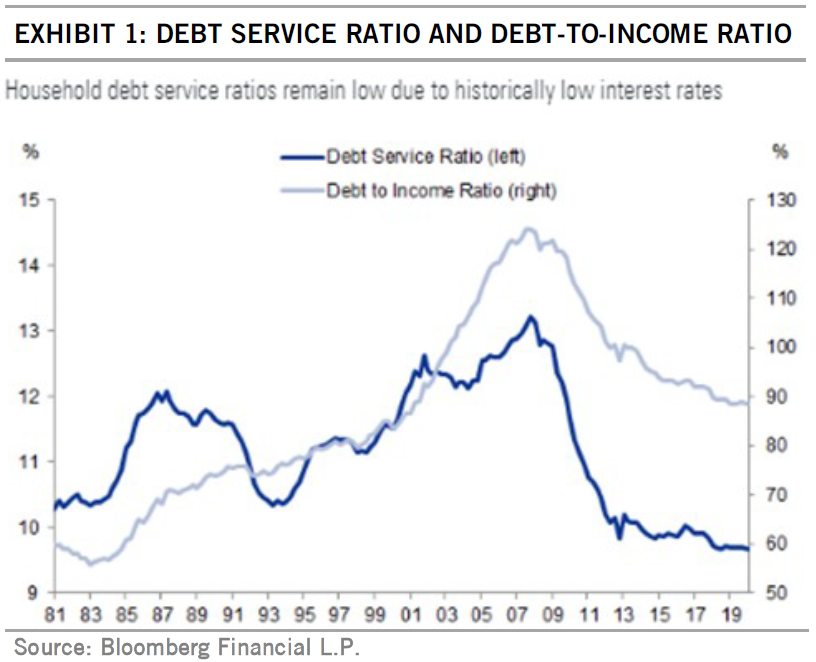 In comparing the pandemic to the Great Financial Crisis (GFC) of ‘08, some are critical of the perceived failure to apply what was learned into new policies, but they fail to appreciate how well -capitalized the banking system was prior to the pandemic due to the strong reforms to banking regulation in the post-GCF years. Another positive change is the much lower household debt service ratio, partly due to lower interest rates but also to consumers learning to live within their means. Household debt as a percentage of GDP is only around 67% now compared to around 85% in ’08-’09.

Beyond lower debt burdens, the quick government response was another applied lesson that has certainly helped cushion the blow from the pandemic crisis, particularly with regard to financial market performance. Payment forbearance for nearly all manner of consumer loans is yet another development that appears to be allowing many to maintain their standard of living even as the unemployment rate hovers well over 10%.

July also saw the US dollar weaken relative to other key currencies after strengthening during the throes of the pandemic. A weaker dollar helps exports and also provides an important competitive boost to emerging economies, particularly those with explicit links to the dollar. We still believe the dollar remains a safe haven, but the health setbacks compared to other major economies may be pressuring the dollar lower along with Europe’s recent agreement on a joint fiscal relief package.

As for yield spreads, they continued to narrow for most sectors which translates to positive total return for investors. The narrowing of spreads is a welcome development for existing holdings and reflective of the distorted market environment, but it leaves us feeling less enthusiastic about adding to holdings since absolute yields (in other words, total yields) have trended lower. MBS are an exception: spread performance has lagged other sectors, so we remain in favor of adding exposure to select issues. This fits with our bias to higher quality bonds since the yield pick-up for lower quality is generally not compelling.

As the quarter ended, the first estimate of GDP for the second quarter was reported at -32.9% (annualized), the largest drop on record which comes as no surprise due to the lockdown. Looking ahead, much depends on the pace of rehiring and the willingness of consumers to venture out. If there’s a silver lining in the dismal GDP report, the big drag from drawing down inventories felt in the second quarter could be reversed in the third. Depleted shelves from the lack of production will need to be restocked, whether in stores or in ecommerce warehouses, which may also get a boost from another relief package from Congress. However, if no relief package is forthcoming we would expect widespread job losses to permeate the state and local government sector since their budgets have been devastated. Despite the public stalemate, we continue to expect a package to be passed since failing to do so would jeopardize all of the extraordinary measures taken thus far. Furthermore, the economic outlook becomes much cloudier if 30 million people (the “regular” unemployed plus a wider net of eligible individuals such as gig workers, the self-employed, etc.) lose the supplemental unemployment benefits due to expire at the end of July.

In closing, we hope your summer allows for some relaxation amidst the gloomy news. In normal times, the challenging economic outlook, rising corporate bankruptcy rate, and deteriorating US-China relationship would likely be producing wider spreads and lower bond prices, but thankfully that is not our reality. Don’t think twice, it’s all right.

Maple Capital Management, Inc. (MCM) is an independent SEC Registered Investment Advisor with offices in Montpelier, Vermont and Atlanta, Georgia. This commentary reflects the views of MCM and should not be considered to be investment or financial advice. MCM does not warranty these views and will not update this communication after the date of publication. Any mention of specific securities is done for illustrative purposes and the securities mentioned may or may not be held in client accounts. No assumption or assurance should be taken that securities mentioned will be safe or profitable investments. For further information, please contact Steven Killoran at 1-802-229-2838 or at [email protected] For further information about Maple Capital, including a copy of our informational bro