Bond yields fell during the month on news suggesting some slowing in the recovery from the pandemic. Despite supply constraints that continue to affect production across numerous industries, both here and abroad, the 6.5% annualized real GDP figure was impressive, although slightly below expectations. The resurgence of Covid-19 is certainly a strong variable for the Fed to consider in their decision on when to raise rates. 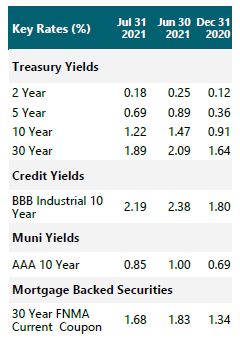 Lift-off of Blue Origin’s rocket on July 20th was another exciting accomplishment for private sector space exploration.  The entire expedition, coming on the 52nd anniversary of the Apollo 11 moon landing, was executed with perfection and all four passengers returned safely to Earth after experiencing a brief few minutes of space travel.

Lift-off of another kind, that of the Federal Reserve in raising rates from the zero bound, is being vigorously debated in the bond market in terms of the timing as well as the conditions that may lead to an eventual rate increase.  Information on the pace of the economic recovery (i.e. some slowing in recent economic data) in the context of rising COVID-19 cases has altered investors’ assumptions about when the Fed may be able to finally lift short-term interest rates.  As a result, bond yields fell in July which led to a very respectable total return on the Bloomberg Barclays Intermediate Aggregate Bond Index of 0.72%.

A quicker lift-off would be expected if the Fed’s analysis of inflation trends concluded that, in fact, it was not merely transitory and instead was becoming more ingrained in business and consumer decisions and expectations.  To that end, a more rapid return to sub-4% unemployment and consistent, hefty gains in GDP growth rates would likely push the Fed into a rate hike sooner than currently expected (mid-2023 is now the expectation).  However, this assumes the pandemic has not instigated renewed caution on the part of consumers and businesses.

On the other hand, a delayed lift-off would be expected if, for example, a resurgence of COVID-19 led to consumers choosing to reduce their in-person consumption in a self-restraining way even if there are no new mandated shutdowns.  Another scenario is that growth simply does not prove as robust as expected due to supply constraints or consumer caution, for instance.

Whatever happens, we believe the long term trends acting as limits on the economy’s growth potential – low population growth, an aging population, low productivity growth, and the high debt burden itself – will all play a role as barriers that will prevent the Fed from being able to lift short term rates very much.  During the last rate hike cycle which began in late 2015, the Fed was only able to get to 2.5% before being forced to cut rates again once the pandemic began.  That rate hike cycle came even as the unemployment rate reached a low of 3.5% and economic growth benefited from the 2017 tax cut.  In other words, the economic backdrop was very constructive, yet the Fed had already paused its tightening campaign before the pandemic came along due to rekindled concerns on growth prospects.

For what it’s worth, we believe the Fed should begin moving toward a rate hike sooner rather than later.  The pedal does not need to be pressed against the floor to enable the recovery to improve, and the distortions in financial markets represent risks that should not be overlooked. 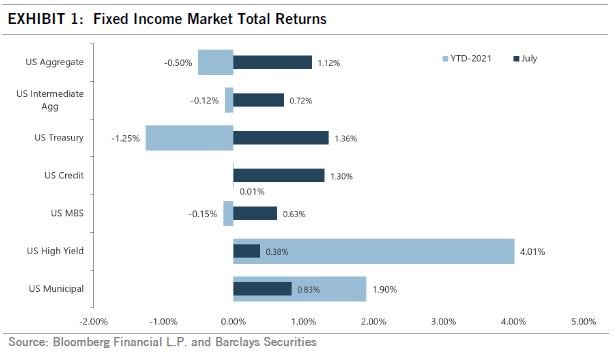 Before lift-off can begin, the Fed still has to jump through a few hoops.  First among these will be tapering their monthly purchases of Treasuries and Agency MBS.  We expect they may be ready to announce the timing of when this tapering (gradual reduction of purchases) will begin in August following their annual Jackson Hole summit, or following the September FOMC meeting.  The actual tapering could then begin later in 2021 or early in 2022.

Once the tapering process is complete and the Fed has stopped purchasing securities to grow its balance sheet as a form of stimulus, it may still continue to purchase securities to maintain the size of its holdings.  These purchases to offset the maturing principal from both Treasuries and MBS could then continue indefinitely or they could be halted at some point.

Another element to all of these steps is the art of communicating the planned moves to the market well in advance to assuage a major negative reaction in the financial markets.  Along the way, the Fed will of course be assessing incoming data which will help inform their decisions and the timing of each element of this delicate process.  This process may be complicated along the way by the expiration of Fed Chair Jerome Powell’s term in early 2022 and the potential that Biden may choose to appoint a new Chair.

One of the keys to making the best decision is assessing economic data and, to that end, second quarter real GDP growth was below market expectations.  Some of the shortfall was certainly due to supply constraints that continue to affect production rates across numerous industries, both here and abroad.  Still, the 6.5% annualized figure was impressive and reflected better results in consumer spending, primarily in services since spending on goods is starting to fade.  Also, real GDP is now officially above its pre-pandemic peak.  The strong growth reflects the reopening of the economy that largely occurred during the second quarter as well as the robust fiscal relief measures that placed money in consumers’ pockets.

The inflation data embedded in the GDP report jumped at an annualized rate of 6.4% during the quarter.  Supply constraints and other temporary factors remain largely to blame, but the persistency of the pandemic may extend some of these constraints which risks elongating the inflation challenge.  The year-over-year change for this index is 4.0%, or 3.5% ex-food and energy.  Other measures of inflation that reference the trailing two year period remain lower.

We will close with one final observation: financial markets have become dependent on the various forms of quantitative easing and emergency policies from the Fed and other major central banks, and some were instituted before the prior round (stemming from the Great Financial Crisis of ’08) had even been removed.  Extricating themselves from these policies will be a major challenge for these central banks, but there’s no guarantee they will succeed in removing them entirely.