While equity markets hit new highs, US Treasury bond yields changed very little in November. Spreads on corporate and municipal bonds generally tightened during the month. With the 2020 election behind us investors will continue their focus on the speed of economic recovery from the pandemic. 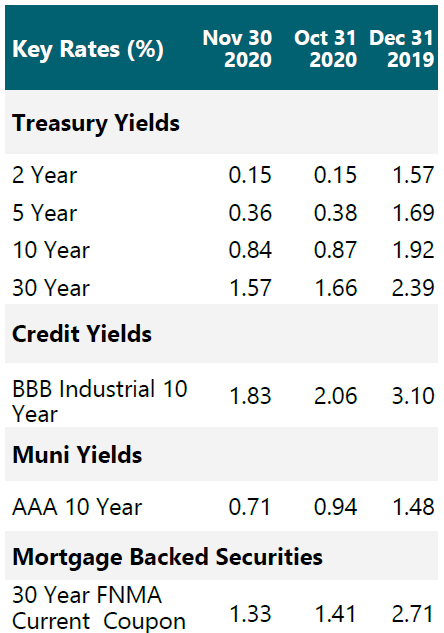 US Treasury bond yields changed very little in November except for the long bond, leaving the spread and income components as the chief sources of total return for the month. Yield spreads on corporate bonds narrowed relative to Treasuries which led to a very strong excess return for the sector. Municipal bonds also fared well, while securitized bonds were generally more stable. All of this activity produced a solid total return of 0.36% for the Bloomberg Barclays Intermediate Aggregate Bond Index for the month.

The major news for bond investors, aside from developments on the pandemic, concerned Joe Biden’s pick of Janet Yellen as the next Treasury Secretary. This selection was well-received in the financial markets since Yellen is a widely respected economist with impeccable credentials (Yale Ph.D) and, assuming she is confirmed by the Senate, will be the first woman to hold this key Cabinet post. Yellen taught economics at the University of California at Berkeley’s Haas School of Business for over twenty years. She also served as Chair of the Council of Economic Advisers under President Clinton and later became President of the Federal Reserve Bank of San Francisco. Bond investors remember her best as President Obama’s pick as Federal Reserve chair following Ben Bernanke, and she had served as a Fed Governor under President Clinton during the ‘90s as well. Another of Yellen’s notable achievements is her current role as President of the American Economic Association. In fact, The Economist went so far as to state “No economist is more qualified than Ms. Yellen,” high praise indeed. All of these accomplishments are relevant since her successor as Fed chair, Jerome Powell, is not a trained economist and has received criticism from some corners as a result. Since she is generally viewed as non-partisan and has already been confirmed by the Senate once before, we believe it is likely she will receive Senate confirmation for the Treasury post.

With Yellen at Treasury, the prospects for another fiscal package aimed at state and local government, small business, and other areas have once again improved. Yellen has repeatedly commented on the need for additional fiscal action to combat the pandemic. Whether or not an additional recovery package is assembled, it seems clear that monetary policy has nearly exhausted its toolkit, and no one knows this better than Janet Yellen. As the global economy recovers from the pandemic and politicians return to their normal pattern of setting budgets and crafting legislation, fiscal policy will have to take a more prominent role to promote economic growth. As we have noted in this space, there are several long term structural factors that will limit the upper bound of potential growth, among them aging and slow growth of the working age population, and someone who understands this can be instrumental in educating Congress.

We hate to dwell on the negatives, but nearly $10 trillion of bonds and other debt was issued this year alone (globally) in order to deal with the pandemic. The stark reality is that the cash flow generation of the global economy did not improve in kind, leaving a deep chasm that must be addressed. Much of that debt is government-guaranteed in one form or another, and no solution is needed overnight, but this mismatch will be a formidable burden to bear on the global economy for decades and monetary policy alone is no longer the answer. A Treasury Secretary who understands this and who possesses a deep well of monetary policy experience hopefully stands a better chance at helping others appreciate the need for new solutions. For too long, the financial markets have been too reliant on the Fed to come to their rescue, and in fact that is what occurred earlier this year. Without fiscal action, the markets and the economy likely would not have fared as well. Given all the new twists and turns that monetary policy has taken, it is now time for a regime change toward a more responsible fiscal playbook with targeted action aimed at improving potential growth. If not, we may slip in to “Japanification” which would mean negative policy rates, deflation, and an ever-rising debt-to-GDP ratio. 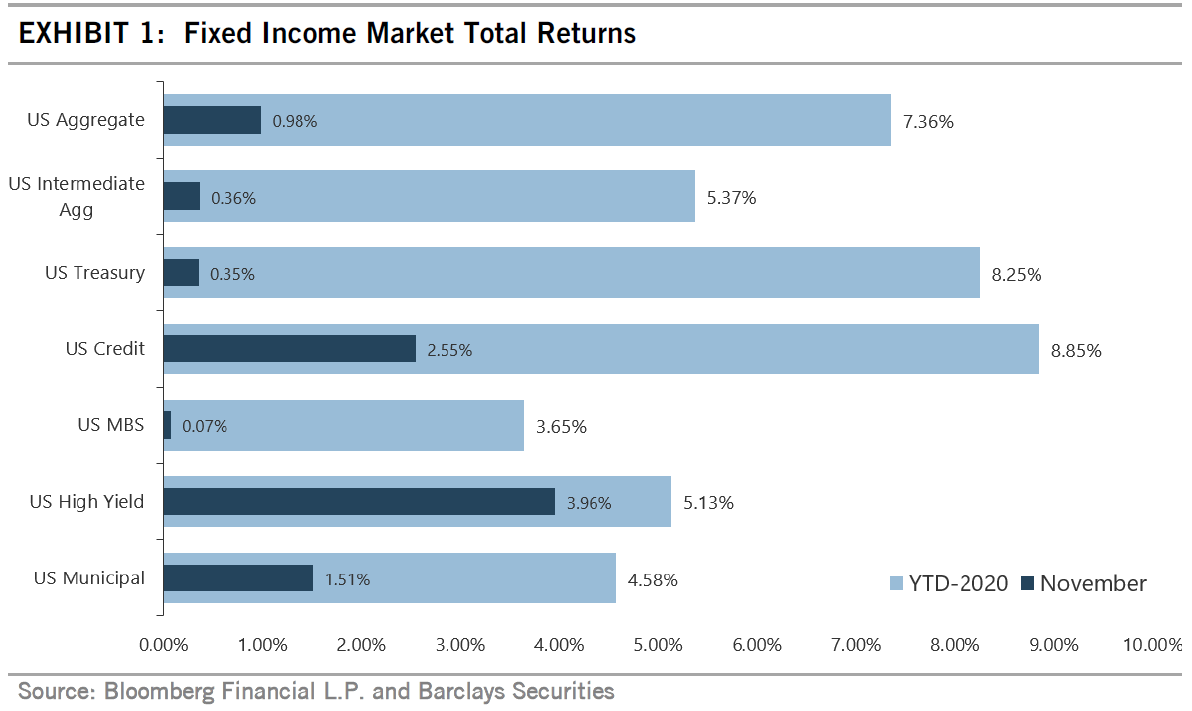 Another key attribute Yellen brings to the table is her appeal to both “progressive left” Democrats and more mainstream centrists. The Fed’s recent shift to an average inflation target was expressly aimed at creating a more inclusive economic recovery which would improve labor market conditions for non-white and less-educated segments of the population, including better wage gains and lower rates of unemployment for those on the lower rungs of the economic ladder. When viewed through this lens, it becomes even more relevant that Yellen is Biden’s choice to lead Treasury. Other nominations to key economic policy posts appear to support this pivot as well, and the number of women appointees is especially noteworthy.

We do not intend for this Commentary to be overtly political, but bond investors may see a Biden Administration taking a more activist approach to policy-setting which could eventually allow the Fed to ease up on its extraordinary measures. We still think bond yields will remain low for the foreseeable future, but there is some budding optimism that yields may rise to more “normal” levels in the longer term if fiscal policy and other government or regulatory initiatives (i.e. non-monetary) can produce a more durable growth and inflation scenario.

With just one month left in 2020, we expect little in the way of economic developments for the remainder of the year. Most forecasts for growth in 2021 call for above-trend performance due in part to pent-up demand for a variety of goods and services, but all resting on the assumption that the vaccine roll-out goes smoothly. Much risk remains in terms of execution and service-sector jobs are still likely to be slow to return to work, but we do expect a more robust economy to unfold. We will focus more on our 2021 outlook in next month’s Commentary. In the meantime, we hope you are able to enjoy the Holiday Season even if it is not yet back to normal.