Yields up, yields down

Treasury yields rose on the back end and credit spreads tightened in the month of December. There appears to be a renewed confidence in the economy as “Phase One” of the trade deal with China has been announced. With negative yields still prevailing across Europe, investors can expect continued demand for U.S. Treasuries and Corporates into 2020. 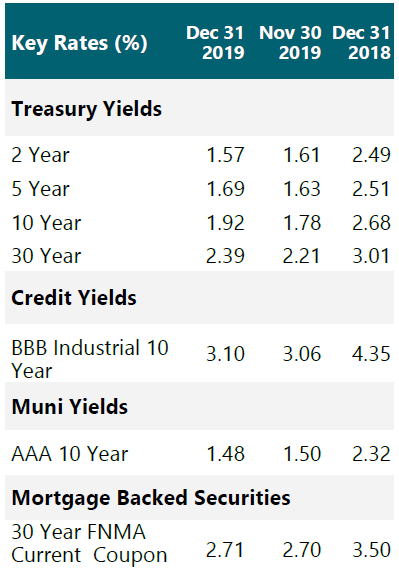 The yield curve steepened during December as longer-term yields rose and short-term yields declined modestly. As a result, the often-cited 2-10 spread, or the difference in yield between two-year and ten-year Treasuries, widened to 35 basis points after briefly inverting earlier this year. An inverted 2-10 spread has usually preceded recessions, so its normalization signifies the market’s view that a recession is no longer a near-term risk. Part of this optimism on growth is the apparent “Phase One” deal on trade reached with China in December which resulted in a relaxation of some tariffs and reduced tension in the negotiations. While details remain murky, much of the focus appears to be China’s purchase of more commodities such as soybeans as opposed to manufactured goods which would have a broader impact on the economy.

Total returns for the month were nondescript given the rise in Treasury yields, though spread tightening in the corporate sector led credit to outperform the broad market. The Bloomberg Barclays U.S. Intermediate Aggregate Bond Index returned 0.17%, while the Intermediate Credit Index returned a stellar 0.39% due to spread tightening. Municipal bonds were up 0.31%. Last month, we wrote that we expected credit spreads to continue tightening in early 2020, but the ten basis points of tightening in December have reduced the relative value of corporate bonds. The path of least resistance is still tighter, but selectivity is paramount as spreads leave little cushion for error.

For the full year, total returns were exceptional due to the combination of a massive decline in Treasury yields and substantial spread tightening. After a tumultuous fourth quarter of 2018 which saw short-term bond yields rise and long-term yields fall, investors correctly forecast a series of three rate cuts which the Fed began in July and concluded in October. These rate cuts, combined with significant spread tightening across most of the spread sectors, greatly improved financial conditions in 2019 and provided a real boost to businesses and consumers alike. This big decline in rates also helped spur a rally in equities and kept confidence high, while real GDP growth held up well throughout the year notwithstanding the decline in the manufacturing sector. The evidence thus far suggests the Fed has been successful in engineering a soft landing, or at the least they’ve succeeded in extending the now-longest recovery in history into the new decade.

Recent economic reports reveal an uptick in housing activity as well as manufacturing which bodes well for an auspicious start to 2020. Based on reported inventories, some degree of re-stocking may also keep the manufacturing sector humming in the first quarter. Should growth prove much stronger than the recent 2% pace, bond yields could increase more due to the reduced likelihood of additional rate cuts. Another risk is higher inflation, which the Fed has repeatedly stated it is explicitly targeting. However, should inflation accelerate more abruptly or steeply than the market deems acceptable, bond yields could rise.

As we’ve noted several times over the last year, selectivity is critical in the bond market today since absolute yields are so low and yield spreads over Treasuries, which compensate investors for taking risk, are also low (or as we say, “tight”). The chart [on the right] from Moody’s on thirty-year Baa-rated* debt shows that, on average, yields are the lowest since the mid-1950s! All indications point to continued robust demand from foreign buyers for corporates, which should enable spreads to remain range-bound around current levels or tighten modestly. Negative yields still prevail across much of Europe and parts of Asia, so the relatively high yields available on U.S. bonds should keep demand steady. Residential MBS could benefit if Treasury yields remain range-bound since the prepayment profile would not change markedly. Bond investors refer to this type of expectation as “carry” since bonds are kicking off their yield and not changing much in price, so it’s anticipated to be a “coupon-clipping” kind of year. Contrast that with 2019 which saw large price gains develop since yields declined. Lastly, municipal bonds should continue to offer strong credit quality since most state and local authorities remain bound by balanced budget requirements and are accustomed to operating with constrained resources.

As the new year begins, we are focused on investing our clients’ funds carefully and deliberately. We will remain selective and take risk only when being compensated fairly, and we will strive to deliver results that our clients expect with no surprises. All of us at Maple Capital thank you for your confidence and wish you a healthy, prosperous New Year! 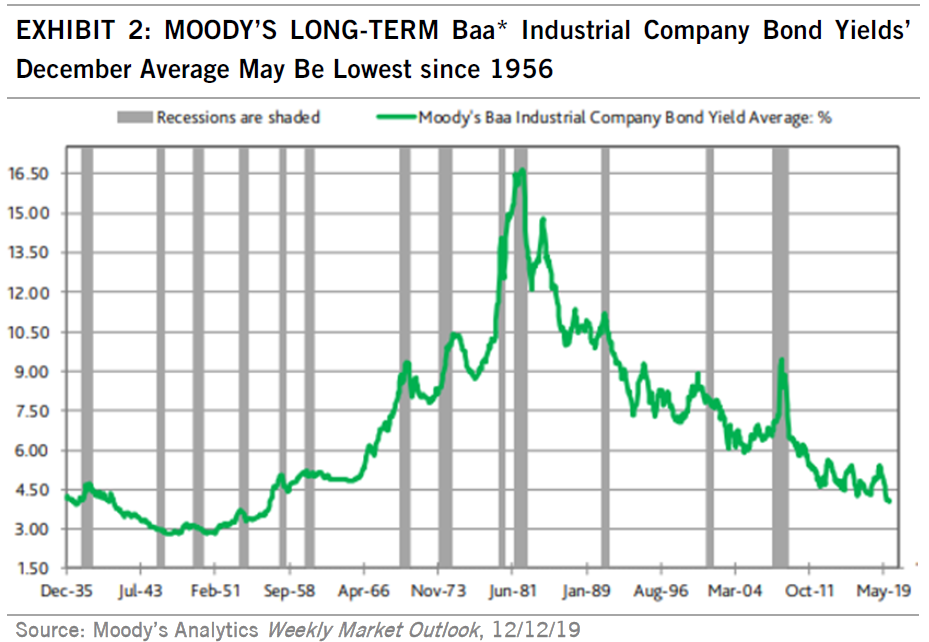 *Baa bonds are the lowest of the investment grade class of bonds, referred to as “BBB’s”