Intermediate and long-term bond yields rose rather abruptly in February as investors digested the progress of the vaccine rollout and the return to a risk-on mindset. Fed Chair Powell’s comments to Congress during the month implied a “stay the course” message, emphasizing the need to support the economy with additional fiscal stimulus if the recovery is derailed. 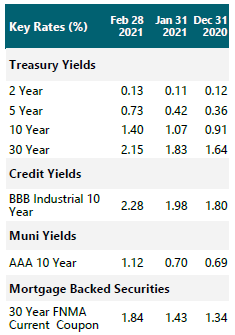 Intermediate and long term bond yields rose by about 35 basis points (0.35%) in February.  There are several reasons for this move:

This rather abrupt move to higher yields left the broad market with a negative total return for the month of -0.77% as measured by the Bloomberg Barclays Intermediate Aggregate Index.

There’s a constant ebb and flow to bond yields since so many factors have an influence on the fixed income market, from basic supply/demand to currency fluctuations to politics to inflation, just to name a few.  While it’s understandable that “higher bond yields” makes for good headlines, yields (on ten year and in Treasuries) remain lower than at the start of the pandemic.  While it’s pleasing for bond prices to climb higher when looking at your monthly statements, it makes investing quite challenging when yields move lower than they’ve ever been in modern times.  We wrote extensively about how low yields were last year due to the unprecedented shutdown of the economy.  It is a welcome relief to see some semblance of normalization returning to the bond market, although short-term yields remain anchored due to the Fed’s stance on the fed funds rate.  These higher yields now unfolding provide better go-forward income for investors and should be welcomed.

What made the sell-off most striking was the speed and of course there’s a tendency for some to extrapolate recent trends and predict a continuation.  We are not offering any predictions but if the pandemic truly is in the process of fading in magnitude, it makes sense for some of the rate drop of 2020 to be reversed.  Interest rates remain very low and far from problematic for borrowers looking to roll over their debt, except perhaps for those who were advocating MMT* as a solution for all our problems.

This recent uptick in ten-year bond yields reminds us of the period following the Great Financial Crisis: after plunging to near 2% in late 2008 during the depths of the crisis, yields returned to pre-crisis levels in the first half of 2009 and remained in a higher range until mid-2010, when they plunged lower as economic growth faltered, and they later reached new lows in 2012 after inflation failed to materialize and growth continued to disappoint.  The point we are trying to emphasize is that bond yields fluctuate — that’s normal — and investors should not focus too much attention on point-in-time values.  Today’s story is reflation and growth that may be ‘too hot’ due to the Biden stimulus plan.  Tomorrow’s story may well be ‘unsustainable growth’ and ‘temporary inflation’ that once again proves the skeptics wrong.  As one of our colleagues is known to say frequently, time will tell. 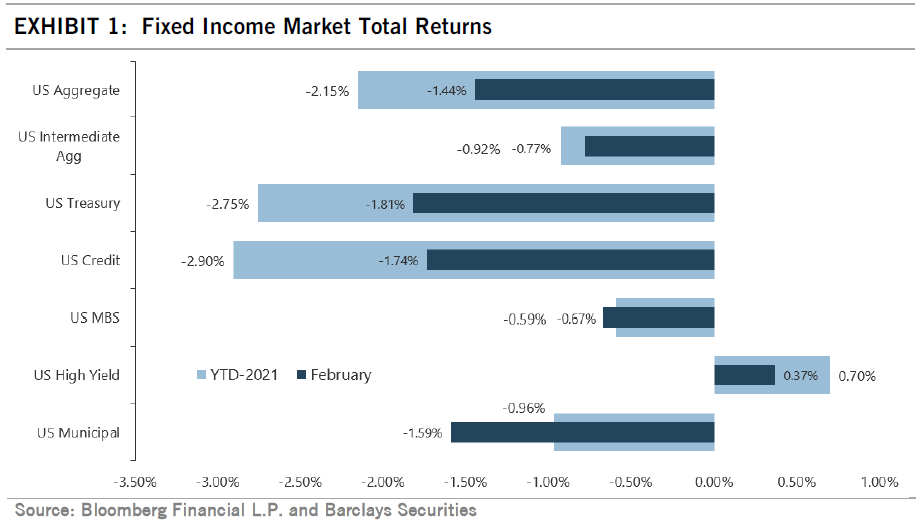 In the meantime, it’s important to remember that unrealized losses on bonds are just that…unrealized.  If the bond is held to maturity and the issuer’s quality remains relatively unchanged, no loss will be realized.  Should you require a withdrawal that necessitates the sale of some bond holdings, we can be selective and avoid selling bonds at losses.  Again, our point is to focus on the income and relative stability of bonds rather than the day-to-day pricing.  One of the chief advantages of investing in individual bonds is the control over each holding that stays in the hands of the investor rather than a distant fund manager who may have other needs and motivations.

In other developments last month, Fed Chair Powell delivered his semi-annual address to Congress where he said little that was new.  In his view, the Fed remains a long way from its goals of full employment and price stability but progress with vaccines should help expedite a return to normal.  He also pledged to communicate any change in policy well ahead of an actual shift.  These comments also reflect Powell’s interest in seeking a second term since he is sticking to the Biden administration’s stance on the need for additional fiscal stimulus even though financial conditions remain exceptionally accommodative.

If recent trends continue, many of the usual economic data series will return to pre-pandemic levels as local economies emerge from government restraints.  We expect the temporary rise in inflation will also be evident soon, which may cause bond yields to rise further in cyclical fashion.  At some point, we do expect the Powell Fed to either begin walking back their hardened stance on keeping rates unchanged until 2023 or initiating some form of Yield Curve Control** to keep bond yields in check.  Either way, the world is awash in debt and higher bond yields will likely act as a self-defeating brake on growth since low rates are needed for bond issuers to rollover their debt at affordable levels.

*MMT: Modern Monetary Theory, a relatively recent macroeconomic theory that claims deficit spending can be as high as politicians would like since there is no limit to money creation.

** Yield Curve Control refers to a central bank policy of controlling market yields on the term structure of bonds via some combination of explicit communications and open market purchases.