(Sort of) Open for Business

Confidence returned to the fixed income market in April as the Federal Reserve announced a number of programs to alleviate liquidity concerns. The economy contracted at an annualized 4.8% during the first quarter. The expectation is for economic data to remain weak. However, the key issue now is how quickly can a new normal start for the economy. 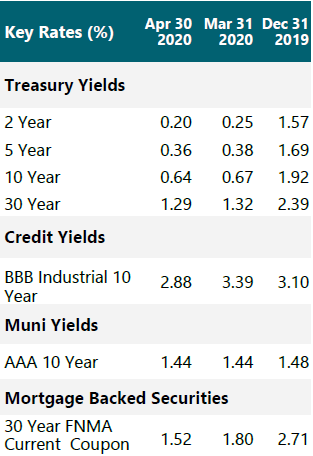 First and foremost, we hope that you and your loved ones are staying safe and healthy during these turbulent times. We would also like to thank all of those engaged in work that allows society’s basic functions to continue. You have our sincere thanks.

So much has happened in such a short time that we felt a brief summary would be a good way to begin:

When an economy simply shuts down, the bond market takes on even greater importance since borrowers require funds for critical operations such as payroll, rent and utilities, supply chain accounts payable, insurance premiums, and so on. With revenue either reduced or nonexistent, issuing bonds provides a lifeline enabling such obligations to be met. That context helps investors understand the massive issuance of corporate debt in April: over $360B (gross) was issued by a plethora of borrowers, breaking last month’s record of $272B. Another $36B was issued by below investment grade (high yield) borrowers, the fastest pace in four years. The municipal sector is not quite as nimble since issuers are far more numerous and investment flows are closely tied to the retail market as opposed to institutional, so the buyer base is not as easily accessed.

Bond market total return results were solid at 1.15% for the Bloomberg Barclays U.S. Intermediate Aggregate Index. Treasury yields remained in a tight range during April, leaving spread changes as the primary driver of returns. Most of the large bond deals in the primary market were priced at generous spreads to ensure they would be readily accepted by investors, and the strong demand for these attractive yields led to further price gains in the secondary market. Of course, higher spreads should be expected when risk is elevated, and risk is certainly higher across the entire economy due to the global pandemic, the economic shutdown, and the uncertainty about the pace of returning to “normal.”

Sector performance was more mixed in April, however, owing to the uneven response to the crisis from Congress and the Fed. The corporate sector led the way due to the overwhelming displays of support for the corporate bond market, and MBS also turned in solid results as wide spreads gave way once the Fed buying began in earnest. The glaring exception is the municipal market, which has yet to receive the support it needs and is now the subject of political wrangling. We expect support to come to this most critical borrower base since the economic collapse continues to negatively impact all types of issuers, particularly those relying on revenue from transportation activity, sales taxes, and income taxes. As a result, municipal bonds remain cheap relative to corporate bonds and we have been selectively adding exposure where appropriate.

The Fed’s response to this crisis has been astonishing. By unleashing a torrent of new programs to address the sudden funding problem, each with specific targets such as large corporations, small companies, and some municipal borrowers, the Fed has taken a decidedly activist approach that has convinced markets that it will “do what it takes” to not only ensure markets function properly but also to allow credit to flow to borrowers who need it. New programs quickly became known by catchy acronyms* like PMCCF, SMCCF, and MLF, and some have been brought back to life from the GFC. Another acronym that may be dusted off from the 1940s, YCC, is one we should all become more familiar with since we expect it will be employed. “Yield Curve Control” is when the Fed controls prevailing yields for all maturities across the yield curve through buying and selling as needed.

Now that rates have been brought down to the zero bound and QE4 is actively adding bonds to the Fed’s balance sheet, YCC is likely the next lever the Fed will pull to keep interest rates low. The Fed engaged in YCC after WWII when the nation’s debt skyrocketed, and Japan has been engaged in a form of it by targeting its ten -year yield. With the deficit for this fiscal year expected to be north of $3T, or upwards of 15% of GDP, keeping interest rates low would allow this debt to be serviced at very low cost. 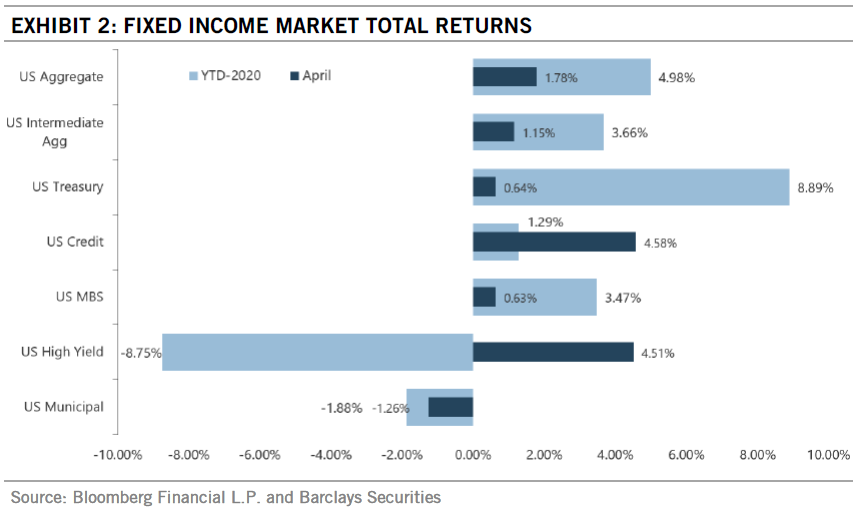 The rating agencies have been downgrading corporate, municipal, and securitized debt. This activity is particularly acute in those segments of the economy where activity will take far longer to be fully restored. Entertainment, travel, and energy-related issuers certainly qualify, but the impacts could be far-reaching. For example, the pace of rehiring may result in higher unemployment for an extended period of time. If this transpires, other segments such as autos, retail, and construction will likely suffer. Work-from-home may become the norm for a wider swathe of America, so the demand for office space may decline. The trickle-down effect from these and other changes to our daily lives are enormous, with the
trickle-down effects almost too numerous to anticipate.

Fixed income markets are functioning more normally now that fiscal and monetary policy responses have been launched. Still, the pandemic may require severe measures to be reintroduced, so risk remains elevated. The path forward is uncertain, with many more questions than any investor is comfortable pondering — will there be another round of fiscal support targeted at municipal borrowers, how will such aid be distributed within the states, will additional fiscal support help consumers struggling with unemployment, how quickly will laid-off workers get their jobs back, how long will travel and lodging be impacted, will colleges be able to open next fall — and on and on. We do not yet know the answers to these questions, but we will invest your capital with care and prudent analysis to keep your bond portfolio as the stabilizer you expect during turbulent times.