Bond yields had a relatively quiet month despite the number of strong economic reports out during the month, declining 9 to 12 basis points, mostly on the back end of the curve. The Fed signaled they will stay the course with regards to their accommodative monetary policy as labor market gains to date have not been nearly sufficient. 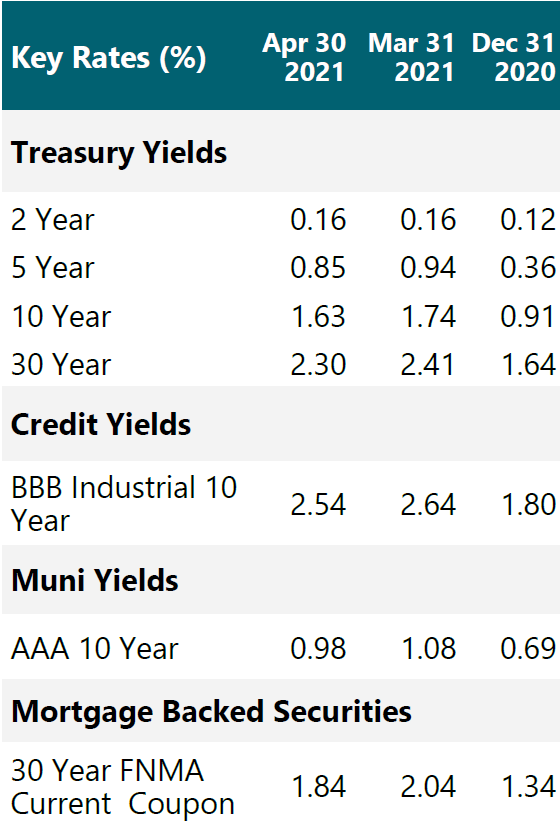 After rising for three straight months, bond yields declined a bit (9 to 12 basis points) in April.  As in the prior months, most of the action involved the 5 year Treasury and longer points on the yield curve.  The short end of the yield curve, from overnight rates to the 5 year, remains anchored by Fed policy which is expected to remain unchanged into next year or perhaps longer.  The total return for the Bloomberg Barclays Intermediate Aggregate Bond Index was 0.52% for the month, which was the first positive result this year.

The relatively tame action was notable since nearly all measures of economic activity were up big in April, hence the song title this month.  The first read of first-quarter real GDP came out at 6.4%, led by a 10.7% surge in personal consumption spending.  Business fixed investment spending was also strong, up 16.7%, no doubt a reflection of the increased reliance on technology during the pandemic as many continue to work from home.  Government spending increased meaningfully too, by 6.3%, which largely reflects the federal stimulus payments as well as spending on vaccines.

Normally, such a rapid pace of economic recovery would cause bond yields to rise since investors would expect monetary policy tightening (in other words, the Fed would be expected to soon raise short-term interest rates).  This time, Fed Chair Powell and the FOMC have made it clear they are willing to let the economy run hot for a time, and in the process allow inflation to escalate above their 2% target.  This experiment is a departure and therefore difficult for many to grasp, but it comes after many years of below-target inflation even when the unemployment rate reached 3.5%.  Furthermore, the rise in bond yields that came in the first quarter arguably priced this recovery into the yield structure already.  The return of foreign investors has also helped calm the market; U.S. rates remain attractive on a relative basis even after currency hedging costs.

Back to growth, second-quarter GDP is expected to be quite strong and will likely reflect a greater rebound on the services side of the economy as the pandemic restrictions are lifted.  The personal income report for March showed a record surge of 21.1% thanks to the latest round of stimulus checks, and we anticipate many will be eager to splurge on dining out, travel, and other pursuits that were put off during the pandemic.  The broadening recovery should also lead to employment gains which is currently the main focus of the Fed.  Continuing unemployment claims in the most recent week still totaled 16.6 million across all the various government programs.  Recall that unemployment benefits were extended to some, like gig workers, who had previously not qualified.  This stubborn level of unemployment has been repeatedly referenced by Chair Powell in his defense of the extraordinarily accommodative monetary policy stance. 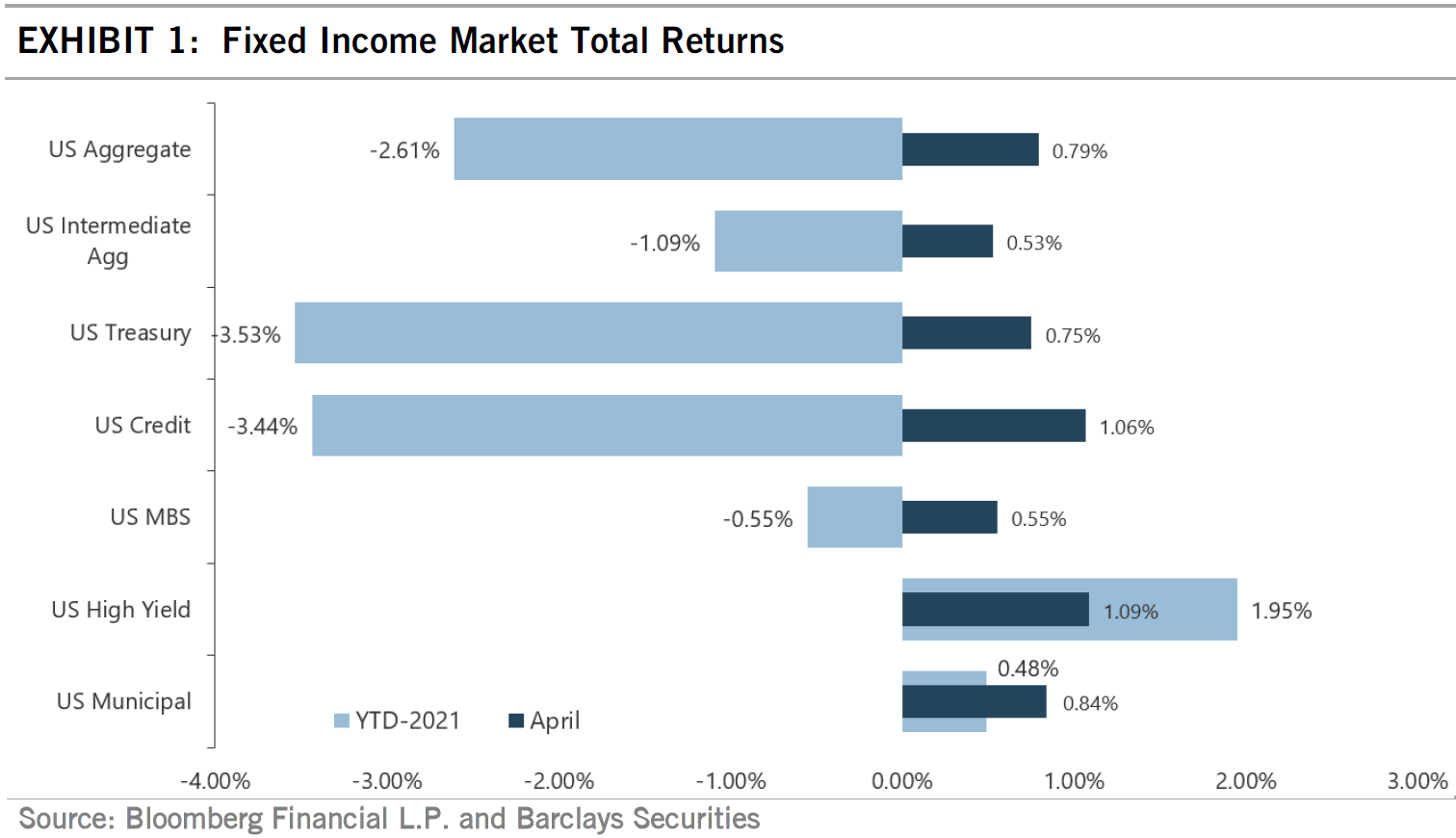 Globally, the pandemic story is more mixed, leaving some countries ahead of the U.S. but most lagging behind.  This lack of cohesion in terms of the pace of vaccinations, and the differences in herd immunity it will influence, causes us to expect a slower recovery for international travel, and it may exacerbate some of the supply chain issues that continue to affect many industries.

In terms of sector commentary, all is well in the corporate and municipal sectors: rating downgrades are few and far between, corporate earnings are rebounding nicely, and municipal coffers have been bolstered by federal largesse.  With Treasury yields still low, investors are clamoring for additional yield and have bid up the price, or said differently, narrowed the yield spread they demand over Treasuries.  We refer to this phenomenon as “tight spreads” but all it really means is that taking risk – credit risk primarily – is not being rewarded very handsomely.  Still, if the economic recovery remains on track and the post-pandemic economy looks anything like it did in 2019, credit risk appears to be receding as balance sheets are repaired and revenue streams are restored to normal.  As for mortgage-backed securities (MBS), the Fed continues to buy massive quantities of these every month, distorting valuations and making them less appealing for new investment.

We remain of the opinion that fixed income investments should remain a core part of most investors’ portfolios even though yields are relatively low.  We thank you for the opportunity to be your eyes and ears in the fixed income market.