“Broken halos that used to shine”

Fixed income returns were lackluster in October as Treasury bond yields increased. Despite the run up in yields, absolute yields remain low. In a low yield environment, investors continue to monitor corporate yield spreads over Treasuries to assess risk to reward. Right now, there are a lot of variables in play for the overall economy and risk remains elevated. 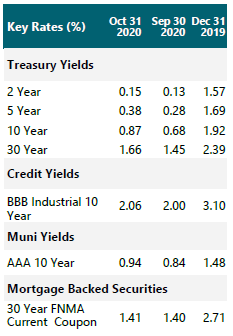 Bond market returns were lackluster in October as Treasury bond yields increased: short Treasuries (two- and five-year notes) rose only a few basis points, but longer term (ten- and thirty-year bonds) rose by about twenty basis points (0.20%). While minor in absolute terms, any changes have an impact since starting yields are so low, which left the BB US Intermediate Aggregate Index with a negative total return for the month of -0.17%.

In previous monthly commentaries, we have noted how the equity market has looked through this year’s earnings declines and deep, though brief, economic contraction and instead focused on the recovery ahead. In the fixed income market, something similar can be seen in the rating agencies’ treatment of most corporate issuers albeit with some notable and outsized exceptions. Some of those issuers who began the year with stretched balance sheets and challenging earnings outlooks have been downgraded, many to below investment grade (BIG), but the wave of downgrades that some were predicting just hasn’t happened.

First, about those downgrades: over $180B of fallen angels thus far have already occurred, which is the highest absolute level for a year and the highest level as a percentage of the investment grade (IG) market since 2009. Fallen angels, as a reminder, are companies downgraded from IG to BIG. However, one reason for the record high is simply the sheer size of some of the companies involved like Ford, Kraft Heinz, and Occidental Petroleum (each with over $20B in debt, see Exhibit 1). When expressed as a percentage of the size of the market, this year’s fallen angel volume is below that of 2009 and similar to 2016. 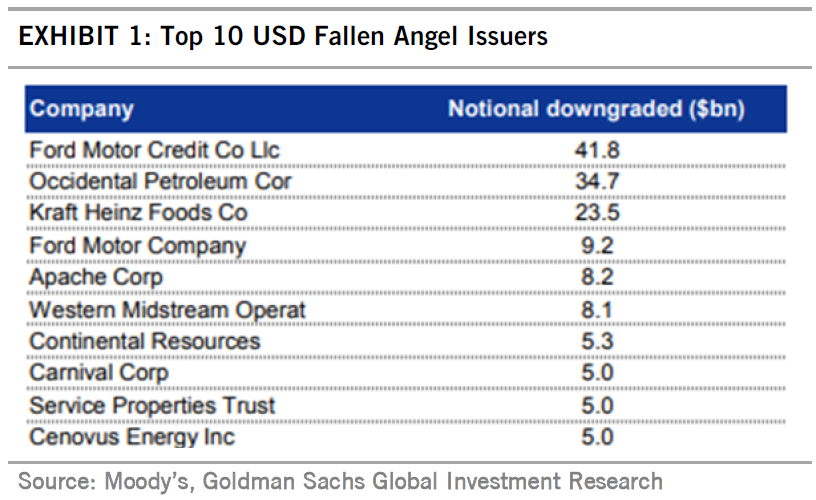 Consumer cyclicals and energy are the two sectors accounting for the majority of fallen angels, nearly 75%, but the pandemic is only partly to blame. Global warming concerns have caused energy consumption to shift and supply has expanded, resulting in very low prices for oil and natural gas. In any event, most of the downgrades took place in March and April since, in the view of the rating agencies, the already-weak fundamentals of these companies were simply not going to improve quickly enough due to the pandemic.

The pandemic is what many would call a Black Swan event, which is 1) unpredictable, 2) carries a massive impact, and 3) is later viewed as less random and more predictable than it was. The major rating agencies — Moody’s, S&P, and Fitch — have mostly considered it a transient event that is being dealt with by unprecedented private and public sector actions intended to get through this period of uncertainty until “normal conditions” return. In practice, this means they are taking a wait-and-see approach to downgrades rather than reacting to the current situation. This is a positive for companies since rating downgrades can result in wider yield spreads, the compensation demanded by investors for accepting the risk of investing in a corporate bond over a similar-term Treasury bond. When companies cross the threshold from IG to BIG, the pool of potential investors shrinks since many institutional policy statements do not permit investment in BIG debt due to the higher risk of default.

This patience being displayed by rating agencies makes perfect sense because ratings should be good through a cycle which would encompass a range of economic conditions, financial results, and balance sheet metrics. Investors typically compare similarly-rated bonds of different companies to determine “relative value”, so imagine how difficult it would be if ratings were changing frequently due to factors that may prove short-lived. Companies can respond to changing conditions in a variety of ways to mitigate any temporary fluctuations, so credit ratings should be seen as encompassing a wider range of outcomes and financial measures.

One way companies fortified their balance sheets in the early days of the crisis was by issuing more debt (see Exhibit 2), which may seem counterintuitive but has helped keep the agencies at bay. By tapping the bond market for liquidity, these companies were able to demonstrate their ability to get through the crisis and some period beyond. Once it became apparent that markets were open for business, many of these companies paid down commercial paper, banks loans, or other short term debt and in the process extended their average debt profile, which again is a positive since rates are so low. This is similar to a consumer refinancing a mortgage and locking in lower monthly payments for a long period.

The big test for the corporate market is how the economy fares in 2021: should the recovery falter or, even worse, take a turn back toward recession, the rating agencies are likely to act with greater intensity. Another factor weighing on this issue is whether companies use their liquidity to reward shareholders, which may also result in negative rating action. Given the big increase in debt over the last few years, we anticipate most will focus on reducing leverage to maintain the good graces of the rating agencies and the investment community. 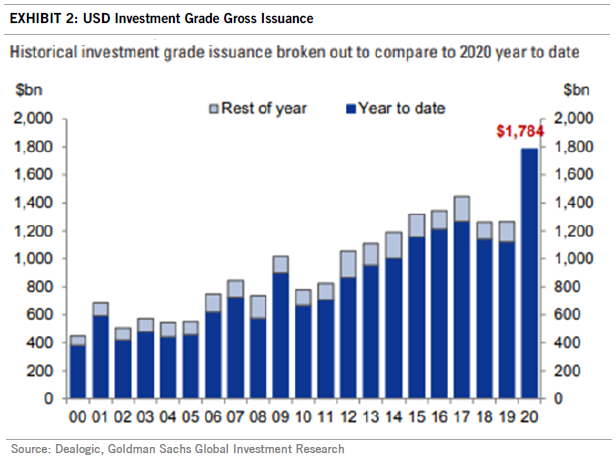 Our view is that given the level of spreads and absolute yields for corporate bonds, caution is warranted — investors simply are not being paid adequately to take much risk. This does not mean we are avoiding corporate bonds, but we are being very deliberate about what we buy and continue to place a premium on quality given the high debt metrics of so many issuers. 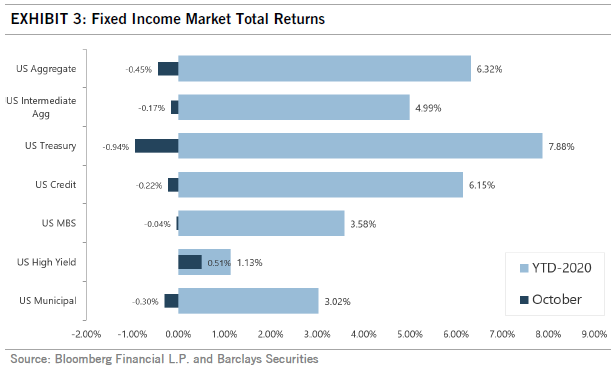 All of us at Maple Capital Management appreciate the confidence you place in us and we welcome your questions and comments.