“You Say You Want a Revolution?”

September’s FOMC meeting proved as one of the more notable in recent memory as the Committee confirmed the adoption of “flexible average inflation targeting (FAIT)”. The Fed has laid out a number of conditions that need to be met before raising rates, perhaps because of the growing economic disparities made more visible by the pandemic. Time will tell whether the new course of action will prove to be more inclusive and narrow the current income gap.

The end of the third quarter usually means cooler temperatures, autumn colors, and overflowing football stadiums — well, two out of three ain’t bad. Given all the challenges this year, most of us are probably just thinking how glad we are that the year is almost over. If you’re looking for higher yield from your bond investments, however, it will take more than a turn in the calendar for yields to move much higher. During September, the Fed’s Federal Open Market Committee (FOMC) confirmed it has officially adopted “flexible average inflation targeting (FAIT)” and revealed they’re not likely to raise rates until at least 2024. While we remarked on this development in last month’s Commentary, formal adoption of the FAIT policy came at the FOMC meeting.

One of the more notable changes stemming from the new policy is an emphasis on economic outcomes. Following the Great Financial Crisis (GFC), Fed governors frequently cited a goal of getting short term rates back to a more “normal” level as opposed to what was deemed an emergency level of zero (technically, 0-0.25%). Now, perhaps in a nod to the growing economic disparities made more visible by the pandemic, the Fed has laid out a number of conditions that need to be met before the policy rate will rise. While maximum employment remains a goal as it was before, there is no set unemployment rate being targeted but rather a number of factors, among them wage gains, aimed at broadening the opportunities for more Americans (more on this below). This judgmental approach could prove difficult for the market to understand, but that’s a story for another day far in the future.

The other major aspect of economic outcomes is an inflation rate that is on track to “moderately exceed 2% for some time.” This is a clear departure from the way the Fed has operated for decades. Since the mid-90s, central banks around the world have targeted explicit levels of inflation which were seen as ceilings: if inflation exceeded the ceiling, policy would need to become more restrictive to slow the economy down. While threats of higher inflation did pop up here and there, none of these targets have been achieved by any of the world’s major central banks. In choosing to depart from the previous policy and welcome higher inflation “for some time,” the Fed is demonstrating a willingness to experiment in the hope that words translate to results. This is also evidence of a traditional toolset becoming depleted.

Why now? The lengths to which foreign central banks have gone to spur growth and reduce slack (which, in theory, increases inflation as resource constraints rise) since the GFC include negative official rates, similar to the fed funds rate. Other measures adopted include asset purchases, including the Fed’s own Quantitative

Easing (four iterations before this year), and forward guidance. Despite all this effort, growth remains moribund and inflation anemic. Suddenly, the pandemic brought the entire US yield curve to within spitting distance of the zero bound and the world is still stuck with the structural impediments we have noted here repeatedly: low growth of the working age population, aging populations, and low productivity growth. Faced with this set of facts, the Fed has chosen to go big and make a concerted effort to remain relevant.
Avoiding deflation is also part of the motivation since central bankers really don’t have a solid playbook for fighting deflation, and the low inflation evident around the world is now exacerbated by a deflationary shock — the pandemic.

Will it work? No one knows for sure, but with so much attention being paid to the pandemic, politics, climate change, social upheaval, and other important issues, financial markets appear content to let the central banks maintain the aura that has surrounded them for decades even though the efficacy of their policy actions is dubious. It’s worth mentioning that Dallas Fed President Robert Kaplan was the sole dissenter at the September FOMC meeting since he believes the FOMC should retain more flexibility and offered that long periods of low rates hurt savers and boost risk. 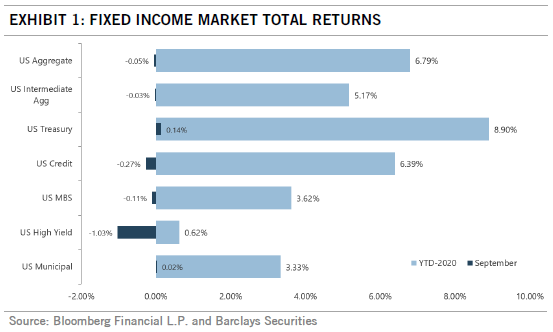 So what’s with the revolution in the title this month? If the Fed will be more willing to allow the labor market to “heat up” and wages to creep higher going forward, the widening income gap may finally stand a chance at narrowing some. According to Fed chair Powell, the maximum employment goal should produce labor market conditions that are “broad-based and inclusive.” One professor at Northwestern University who has long studied central banks remarks that a “fundamental shift in the way that central bankers understand their mission and their role” is underway. Christine Lagarde, who now heads the ECB and with a mostly political background, has also made clear she wants issues such as climate change to play a more prominent role in the bank’s framework. She also expressed an interest in exploring a similar policy of allowing above-target inflation. All of this suggests this is indeed a new era of central banking, one that does not yet have a catchy name, but no doubt will in a few years’ time.

You say you want a revolution? Who needs Superman when you have LowRateMan? Jerome Powell — Monetary Policy Revolution-Man!