“Can you Take Me Highter” – Creed

The Treasury curve steepened in August, partially in response to the Fed’s decision from Jackson Hole to recast its 2% inflation target to an average inflation target. As a result, most bonds had negative total returns during the month, with the exception of High Yield and MBS. There are several variables at play as we look forward to gauge the health of the pandemic economic recovery, including job cuts, fiscal assistance to state and local governments, and the upcoming election. It is reasonable to expect some increase in volatility. 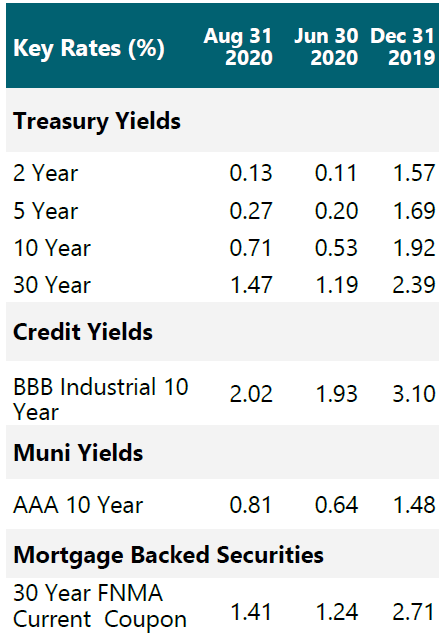 Jackson Hole evokes fond thoughts about hiking and skiing, but bond investors also know it as the locale for the annual confab of global central bankers. While this year’s event was virtual, the outcome w a s a b o u t a s excitement-filled as a bond investor could hope for: The Fed is recasting the 2% inflation target/ceiling to an average inflation target. This change comes after much deliberation and may seem minor to most, but it represents a fairly large shift in thinking since “price stability” has always been part of the Fed’s dual mandate (maximizing employment is the other). What it means in practice is a new toleration for higher inflation, should it ever materialize (see Exhibit 1), partly with the goal of allowing the job market to create more opportunities for lower paid workers in both the number of jobs and wages. For that reason, it can be seen as a progressive step and much in keeping with the increasing focus on social issues, but it also risks undoing the current benign inflation expectations that have taken decades to achieve. 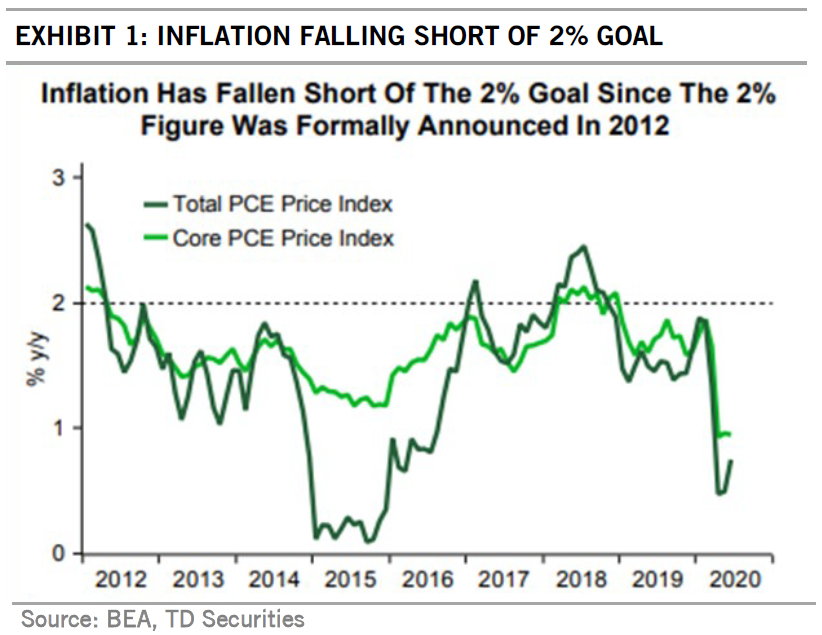 Powell left out many details and some additional policy changes may follow the FOMC’s September meeting, but it does appear the Fed is comfortable with some ambiguity in favor of more flexibility. This shift is not surprising in this new era of central banking experimentation with unconventional policies and it brings to mind a few choice lines from Paul Volker’s last book, Keeping At It. Volker was no fan of tolerating higher inflation and thought it was foolish to assign “such weight to tiny changes in a single statistic…with all of its inherent weakness.” He pointed out the fundamental impracticality of fine-tuning policy to reach an outcome with such numerical precision, and he also cautioned central bankers to avoid encouraging or tolerating rising inflation, extreme speculation and risk taking in markets that could threaten financial stability. We will never know for sure since he has since passed but one can only guess he would not endorse the Fed’s new “average inflation target.” 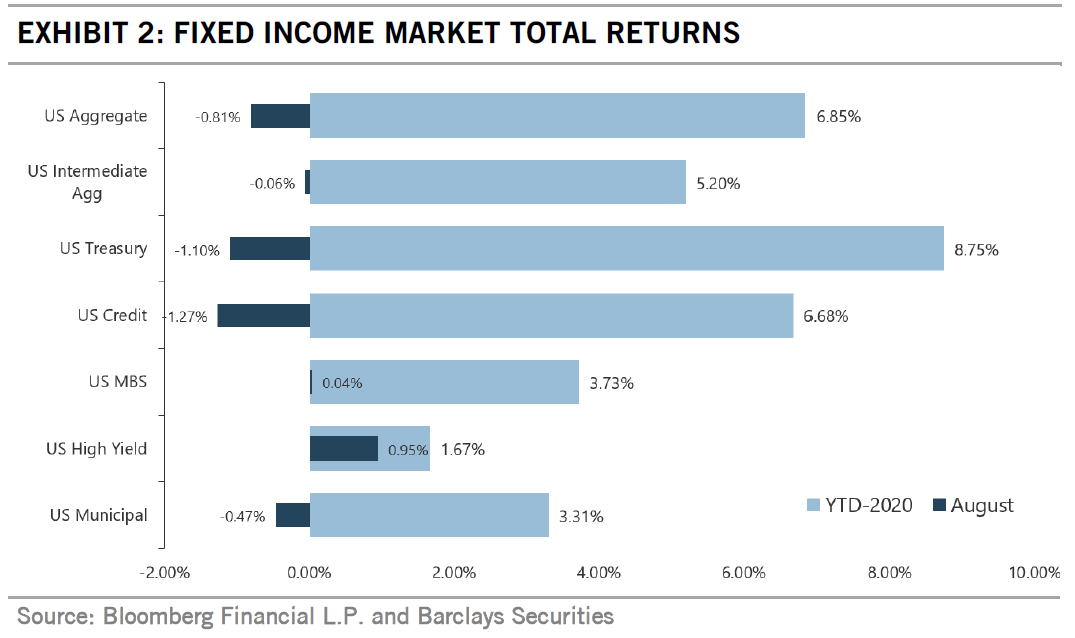 We will leave the prognosticating for others but cannot help pointing out the world’s major central bankers are all trying to create inflation, but the only variety that appears evident is asset inflation. Central bankers still fear deflation but cannot create inflation by fiat, just as they cannot create demand for goods and services. Short term rates ought to stay low for longer now that higher inflation will be tolerated and this new attempt is better than negative policy rates, in our opinion, but the efficacy of higher inflation is suspect at best and fraught with risk in a world full of unprecedented change.

Partly as a result of the well-telegraphed new policy, the yield curve steepened in August with short rates remaining well-anchored and the long end selling off. This development led to a negative total return for the Bloomberg Barclays Intermediate Aggregate index for the month of -0.06%. Spreads on non-Treasury securities were mostly range-bound in August following big moves earlier this summer. Other potential consequences of the Fed’s policy change: the dollar could weaken further, future FOMC officials could view the policy even more liberally, and new measures of inflation could be used to modify the process still further.

Economic reports in August revealed a very robust set of conditions for the housing sector, both single-family and multi-family segments. Fairly healthy gains were also seen in consumer spending and business equipment spending. However, other high-frequency indicators of economic activity point to a flattening out in momentum lately. This is not terribly surprising given the setbacks with the pandemic, the continued near-closure of many large segments of the service sector, and the global nature of the economic turmoil.

Looking ahead, the fall sports and back-to-school traditions are being tested by the pandemic like never before. Coupled with the upcoming election, the prospects for renewed volatility appear to be rising. The lack of additional fiscal action to assist state and local governments is a major concern, and job cuts could accelerate if no resolution is found. Such a development would likely stall the economic recovery since many large employers are beginning to make permanent the job cuts of earlier this year. Given the jobs at stake and the extreme conditions brought on by the economic shutdown, we believe another sizable assistance package is warranted and likely to come by year end.

Maple Capital Management, Inc. (MCM) is an independent SEC Registered Investment Advisor with offices in Montpelier, Vermont and Atlanta, Georgia. This commentary reflects the views of MCM and should not be considered to be investment or financial advice. MCM does not warranty these views and will not update this communication after the date of publication. Any mention of specific securities is done for illustrative purposes and the securities mentioned may or may not be held in client accounts. No assumption or assurance should be taken that securities mentioned will be safe or profitable investments. For further information, please contact Steven Killoran at 1-802-229-2838 or at [email protected] For further information about Maple Capital, including a copy of our informational bro